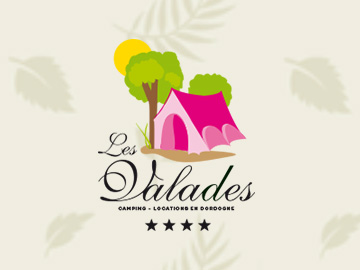 Let us tell you how we fell in love with les Valades !

In 2011, we decided to embark on a joint professional project. Taking over a campsite soon  became the activity combining our skills and our wishes. Me, Jean-Charles, I had already exploited a campsite in Montignac for 10 years and I, Laurence, worked as a tourism project manager for 13 years.

We actively started our research and visits. The first campsite we visited was Les Valades. In the month of August 2011, on a very hot day, we arrived at Les Valades situated in the village of Coux & Bigaroque, hitherto unknown to us, although both being originally from the Perigord.

On arrival at the car park, we cannot say that we had the “wow” effect…. but that did not discourage us and we then started our visit of the campsite.

Fairly quickly we approached a sinuous descent in the middle of the so-called high pitches of the campsite. Already we were (pleasantly) surprised by the large size of these pitches, their delimitation and their intimacy. Then we discovered a central part planted with umbrella pines before seeing a large prairie with a totally unobstructed view of nature, the surrounding landscape and the lake. And there we had the “wow” effect! We had never seen nor imagined a campsite like this one. All around this prairie, wooden chalets were installed, all with a terrace and a view on the prairie or the lake.

But our visit did not stop there. After having crossed the central path leading to the lake, the last part of the campsite became visible. We discovered the last pitches, the pools and the freshness of the lake. We were conquered!

We realized “our love at first sight” in 2013. Since then, every year we try to add our personal touch while keeping the original spirit of the beginning.

By choosing Les Valades for your next holiday, we hope to make you live the same experience and much more…